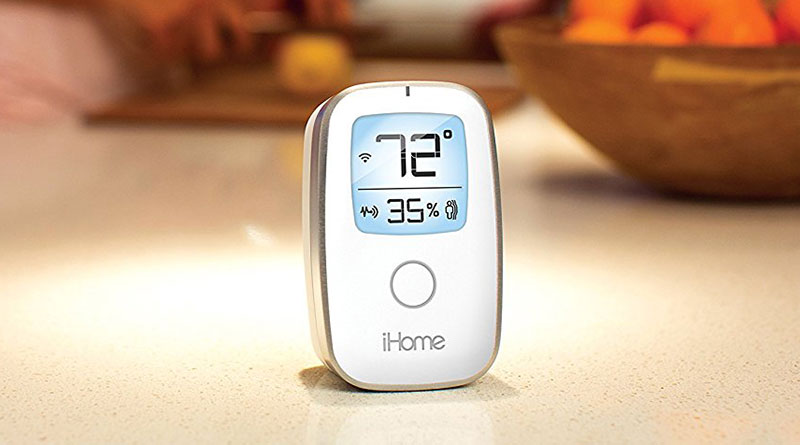 Some people are always on the lookout for an ‘all bells and whistles’ device, the kind that can fry your eggs, grab your paper, predict the winning lotto number et al, but until we truly enter the era of the Jetsons (and ‘Back to the Future’ for lottery numbers), none of these things are that easy to come by. What we can count on are devices that do more than tell the temperature, and with the iHome iSS50 5-in-1 Smart Monitor, we have that. Let’s take a look…

Starting with the box itself, given that this device has a display, you want a bit of protection, and this package has more than enough of that, coming in a nice thick cardboard carton. The box itself tells you everything you need to know right on the front of the box, which while a bit too much in some ways, guarantees that the person knows exactly what they’re getting. The device is on the front, and displayed at ‘actual size’ according to the small print. It displays the 5 different sensors that it contains, which we’ll get to soon, and it even has one of their recommended products listed on the bottom to be used as a companion piece for the sensor, the iSP6X Smart Plug. Most importantly, it display the ‘Works with Apple Homekit’ marque on the front. The big thing to note with most of iHome’s smart devices is that they work with possibly the widest range of smart home ecosystems – Apple HomeKit, Amazon Alexa, Google Assistant, Samsung SmartThings, Wink, Nest and even IFTTT. All good so far. The rear is more of the same, with some extra specs and a few use cases on how to use this with automations.

On opening the device, everything you need is there right in front of you; The 5-in-1 sensor, the mini USB power cable, and the USB based, branded power supply. Everything is all packed in nice and safely, so no qualms at all with iHome’s commitment to protecting the device.

The device itself is quite light but not unnervingly so, coming in at 145g/5.1oz. It stands at around 107mm/4.2″ high and is designed to be stood up and placed somewhere you can see the screen, if that’s what you want. The front has a large motion sensor, as well as the display screen, and what appears to be either a sound or humidity sensor on the top. On the rear of the device you have the input for the micro USB cable as well as the HomeKit code and a couple or vents. This device connects to mains electricity via the provided cable and power supply, but there’s no internal battery, so if you unplug it, the device stops dead. There are also two physical buttons, one of which controls the brightness of the display, which can be set to high, medium, low and off, or automatic, which in tandem with the ambient light sensor, adjusts the brightness of the screen accordingly. The other button is simply for resetting the device. The device itself connects to your home network via wi-fi.

The display itself is nice enough, with the main upper part displaying the temperature, with a wi-fi symbol to confirm connection to your network. The lower 3rd of the display shows the humidity level, along with icons for motion and sound detection. There’s no symbol or information regarding the ambient light sensor. The display has a blue tint, and it’s clear from a reasonable distance and being LCD, it’s quite sharp too. As this is mains powered, you are limited to placing it where you have a power outlet, but in my experience, this is a device that just stays put, so I’ve had no problem with it being rooted to one location, and if I do want it somewhere else, it’s really not a big deal to unplug it.

As you can see in the screenshot above, four of the sensors have their own tiles; Ambient light, Humidity, Motion and Temperature, with the sound sensor the only one absent. Of these four sensors, only the motion sensor is available for automation, although the other sensors are available for automations and triggers in 3rd party apps and the iHome app.

In iHome’s own app, there are a series of settings for the device, although you do need to set up an iHome account that then allows the monitor to connect with their cloud service, which in turn allows for adjustments. As with any fully fledged HomeKit app, you can see all your other HomeKit devices via this app, although I do prefer to use the standard Home app for day-to-day control of things. out of the five sensors, three of them can have their sensitivity levels adjusted – motion, sound and ambient light, so for this reason, I tend to keep the iHome app to hand.

I’ve had this 5-in-1 sensor for a while now, and while all the sensors work well enough, at the time, I purchase this for just the motion sensor and unfortunately, it’s extremely slow to respond, to the point where I can be standing directly in its field of view, in daylight, waving my arms about and it only finally responds after maybe 4-5 seconds, which is staggeringly slow. Since then I’ve ended up with more motion sensors that I know what to do with, so I now don’t even have to rely on this particular sensor, and so it’s nice to have it as a quick reference display for temperature and humidity. I didn’t pay very much for the device thankfully, so I can live with this one shortcoming and use the other sensors as well.

If you want something that has data that can be read without having to pull you iPhone out, then this is a great product, especially if you can find it for around US$30 like I did, but if you want to rely on it as a motion sensor then I would save your money and buy a dedicated sensor. 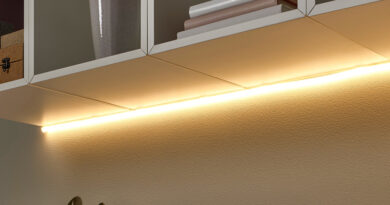 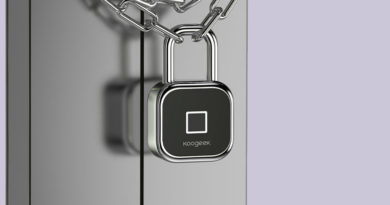 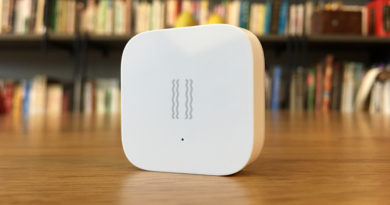