In a world where technology moves at such a fast pace, it’s often unrealistic to expect companies to update their legacy products with added functionality, although there are rare occasions when this does happen, like for example when Vizio began adding HomeKit support for some of its Smart TVs going all the way back to 2016. Yeelight is another such company that has impressed many with adding HomeKit support to four* products that had all been around for a while. Not only did they deliver on this promise, but did so on time, promising support for Q3 of 2019. It is promises like these that tend to put some other company’s undelivered claims to shame. Of these four products, we’re today looking at their Colour light bulb.

* three of these devices are branded as Yeelight, with the fourth branded as Mi but actually manufactured by Yeelight

There’s nothing to ‘write home about’ when it comes to the packaging, as it’s fairly standard, although the overall packaging design is nice and informative enough. It should be noted that as these bulbs have been around for quite a while, they precede Yeelight’s July 2019 announcement of HomeKit integration for this product, and so there is no HomeKit badge on the packaging. Oddly enough, of the big three smart home systems, only Google Assistant makes an appearance on the front of the box, along with a ‘Works with Clova’ badge (who?). Despite this, rest assured that it not only works with Google but Amazon Alexa and Apple HomeKit too. The front also shows the bulb is 800lm, which is more than a lot of smart bulbs at this price point, and only a few lumens short of the Philips Hue equivalent, but 50lm less than the recently reviewed Vocolinc L3, which tops out at 850lm, although the L3 is a larger bulb than either of the former products, being an A21, as opposed to the standard A19 size bulbs.

The two sides of the box briefly promote the Yeelight app and its capabilities, and the various standard options available to you, including no requirement for a hub, due to using Wi-Fi for its method of communication, 10w of power, making it equivalent to a standard non-LED 60w bulb, schedules and remote access.

The rear of the package has some basic specifications, one of which is important to note, in that this bulb is, in fact, capable of working with 110-120v or 220-240v systems. I mention this as there are some sites that may well list this as only 220-240v compatible, which may put off some potential US customers.

The Yeelight bulb has a different design than the standard shape you see with many bulbs – smart or otherwise – with a large white base, crisscrossed with lines forming a diamond-shaped pattern. The base starts out at a flat angle that joins up with the diffuser part to continue the line, eventually curving to create a flattened dome.

In some ways, the shape of the Yeelight bulb is reminiscent of the Philips Hue colour and white ambience bulbs, although only in passing is there any real resemblance. Both bulbs are considered A19 bulbs. The Yeelight bulb is slightly taller than the Hue, although unlike the Hue bulb, which has a seam that reveals the join between the lower and upper parts of the diffuser, the Yeelight is in one piece, which makes it more attractive. However, in practice, this shouldn’t matter, as for the most part one can assume these bulbs will be hidden behind lampshades or in recesses for the most part. In terms of the feel of the bulbs, the Yeelight has a lot more ‘heft’ to it, with the weight of the Hue bulb coming in at 76g/2.68oz, compared to the Yeelight being 177g/6.24oz. This may be a good or bad thing, depending on a variety of factors, but the Yeelight bulb does feel a lot more substantial in the hand, whilst the Hue feels very lightweight and insubstantial.

Sticking with the comparisons to the Hue bulb, I’m a fan of the company’s products and I do like the fact that it uses a hub. Some people aren’t so keen on hubs, and there are points to be made on both sides in this topic, but Hue does require the hub, unless you want to limit yourself to just using the Bluetooth connectivity found in the new models, although that comes with limitations, including no HomeKit compatibility. When it comes to the Yeelight bulbs, there’s no requirement for any hub, as they use wifi.

INITIAL SET UP
With the proliferation of HomeKit compatible devices from companies within the Xiaomi Smart Home ecosystem, it has usually been necessary to set up an account with Xiaomi, as well as installing their own Mi Home app, or the Yeelight app. Some newer products that have come complete with HomeKit codes don’t ‘require’ the apps, but you’d still need them for the inevitable firmware updates, so you may as well sign up anyway.

This Yeelight bulb does, however, require the Mi Home or Yeelight apps, and in fact, the Yeelight app usually asks for the same credentials that you’d use in the Mi Home app, so it doesn’t matter at this juncture which app you use. The need for the apps is simply down these bulbs getting the HomeKit update in the manner that they have done; They have the option to be added to HomeKit, but as they were manufactured before the update, they don’t come with a HomeKit code. This means you have to use the app to connect them to HomeKit. In order to add this bulb, I’m demonstrating it via the Yeelight app, but the procedure is fairly similar for the Mi Home app.

The next set of steps are to be made on the assumption that after having already installed the bulb, you’ve updated the firmware that allows for HomeKit functionality.

COLOUR REPLICATION AND COMPARISON
After all the setup is complete, you’re able to use either the Mi Home, Yeelight or Home apps to control the bulb. I took a few images of a selection of colours to show how well they appeared, as well as how it fared with white reproduction. For the sake of a benchmark, I also took photos of the Hue Colour bulb, under the same conditions.

Looking at the images above in the knowledge that these haven’t been taken with any specialist equipment, you can see that the Yeelight bulb hold up very well against the Hue bulb. The orange is a little stronger on the Hue bulb, and the blue seems to be a bit purer, but generally, the results are pretty much the same.

The results for the Yeelight and Hue are less close although that’s not to say one is especially better than the other, they’re just different. The Yeelight’s cool white is closer to the Hue’s mid white, with the Hue’s cool white looking bluer. The Yeelight’s mid white has a more expected mid white look to it. The warm whites on both bulbs, whilst slightly different, are both ‘warm’ enough in appearance, with maybe the Hue looking a little stronger.

PERFORMANCE
I’ve had a few different Yeelight bulbs for a while now, including the Tunable White versions, and prior to HomeKit integration, they worked flawlessly. Unfortunately, it’s not quite the same story after the HomeKit update. I will qualify that by saying that due to the fact they were working well before the update, it’s clear the products are great, but for whatever reason, the HomeKit integration has made them a little less reliable. This has manifested itself in them losing connection to HomeKit, whilst still being totally functional in both the Mi Home app or the Yeelight app, so there seems to be an issue with either the update or with HomeKit itself. As of typing this review, iOS13 has been out for a few weeks now, and it has already been well documented that iOS13 in relation to HomeKit has been a bit of a mess, so a fair amount of the blame must lay with the Home app in this instance.

Putting aside the occasional disconnection, which I should add has happened to other devices in my HomeKit setup, I’ve been really happy with the colours, the responsiveness and the additional features you can get with these bulbs if you use the Yeelight or Mi Home apps. Because the Yeelight and Mi Home apps are also compatible with Siri Shortcuts, these additional features can also be accessed via voice control as well as with schedules etc, so you don’t even need to go into the app to activate the ‘flow’ feature for example.

I like that these bulbs are over 100g/3.5oz heavier than the Hue, simply for the fact that they feel so much more sturdy, although that really is just me, as this makes no difference to the colour. If that isn’t a good excuse to take a chance on these bulbs, take into account that these bulbs are a lot cheaper than the Hue equivalent (US$25.99 vs. US$47.50 on Amazon at the time of writing), and that’s not taking into account that should you go for a Hue bulb as your first Hue product, you’re going to have to get the Hue Bridge at some point, especially if you want HomeKit integration.

Having seen what Yeelight has in store for us in the coming months, it’s clear that they’re ahead of the game in terms of lighting in many ways, both in price and originality, and it’s clear that they’re also committed to bringing HomeKit to a lot more products down the line, so whilst I love my Hue stuff, I’m very excited about Yeelight products, including this mere bulb, which a few months ago didn’t even have HomeKit! That’s a good sign. 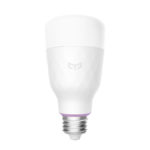 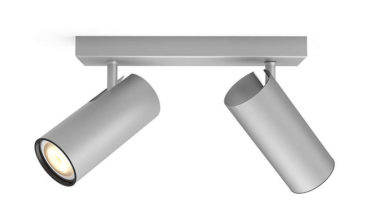 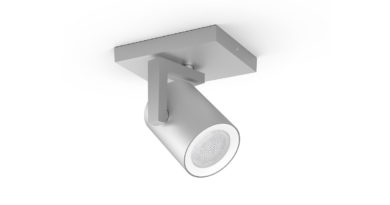