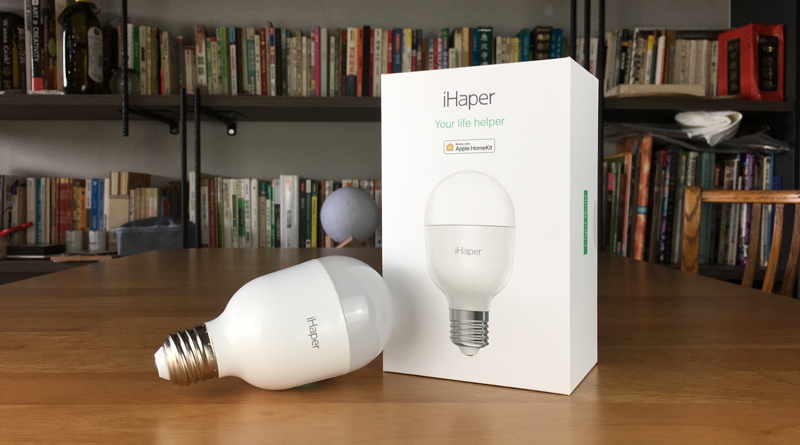 Smart bulbs are one of those things that can really make a difference to your home and how you interact with it, although there are others that prefer to use smart switches with dumb bulbs. Each has its own benefits, and if you’re talking about colour bulbs, then smart bulbs may have the edge over switches under these circumstances, as while you can get smart dimmers, none, that I’m aware of, come with the ability to control the hue of the light. This brings us to whether a white bulb would have any real benefits over a smart dimmer switch, and while you can once again claim that a smart switch can’t change the colour temperature of a tunable white light bulb, like the VOCOlinc L2 tunable White bulb, for example, if you had a basic smart bulb, like the Philips Hue Warm White Bulb, then things get less attractive for smart bulbs. So, given all the pros and cons, today we’re going to see if the iHaper B2 White Smart Bulb is worth your hard earned cash…

You know me right? I love me some good packaging, and whilst iHaper are the ‘new kids on the block’ so to speak, they certainly have spent some time and money on a very decent box. Just as a rough idea, the box is pretty much the kind of quality you only see from a high-end smartphone, it really is both sturdy – to the point of it almost feeling as strong as a real wooden box – and nicely detailed. One had to wonder if they could’ve just not gone so overboard and saved us all some money on the product itself, but I’m not complaining. Apple’s long-standing influence on both product design and associated packaging have clearly had an influence on the packaging, and the product itself, as you can see below.

The product is really held in place with the ultra-firm foam rubber along with one of three examples of the HomeKit code – one on the inside of the box, one on the bulb itself, and one inside the booklet. Speaking of the booklet, they’ve also really gone to town with this, as it’s on nice glossy paper, and has instructions in seven languages – English, French, German, Spanish, Italian, Japanese, and Mandarin. I’m impressed so far, so it’s two for two.

Now at first glance, the bulb has a really nice, modern shape, and let’s face it, not many companies go out and try to do something different, with only LiFX and Nanoleaf really pushing the curve on design at this time, so I have to say that I do like the shape. The only telltale sign so far that this isn’t really quite the premium product the packaging would have us believe, is the finish of the bulb itself. The join between the diffuser and the main body is a little rough, to be honest, and although I didn’t pay much for the bulb, some things like this should be better. It’s how it performs though ultimately, and once the bulb is hidden under a lampshade or a recess, we’re not going to be near enough to worry about the rough edges – as long as they don’t fall apart of course.

This bulb does stick out from many other smart white bulbs in that it’s set to what iHaper describes as ‘daylight white’, which is approximately between 2800-3000k. This is from the manual, so don’t think that this is a tunable white bulb, as it’s not. It can dim, but it’s set at somewhere between these two numbers. In laypersons’ terms it definitely comes across as cooler than the warm white bulbs by Hue, and for that reason, they ‘appear’ to be brighter, despite the fact they’re almost half the lumens; The iHpaer B2 is rated at 7w, with 470lm, whilst the Hue Warm white is rated at 9w, with 840lm.

This is a low powered bulb essentially, but in all honesty, I’ve found that it seems much brighter. I don’t know how they manage it, or whether my eyesight isn’t what it was, but above are two totally non-scientific comparison shots to give you an idea of what I mean. In the first image, you can see the difference between the colour temperature of the Hue Warm White and the iHaper B2. Personally, I’m not a massive fan of the warm whites, so the B2 definitely has my vote for the temperature it’s set to. It’s cool, but not so much that it looks blue. The second image is for comparison to something with a more similar output capacity, in this case, the LifeSmart Blend Wifi bulb. The Blend is 6w, although I don’t know the lumens it can produce. It’s also worth pointing out that the Blend is a colour bulb, and this is the closest I can get to a similar warm white to the Hue in this case.

Here are the basic specs. for the iHaper B2:

Aside from the fact that it’s stuck at a particular colour temperature, it can, of course, be dimmed, and it doesn’t too bad a job of it either (unlike my photography skills, please excuse the unavoidable ‘frequency’ lines).

In terms of overall reliability, I’ve been testing this bulb, along with its sibling, the B1 Colour Smart Bulb, for a few weeks now, and when it comes to connecting, it was all very easy, as we’ve come to usually expect with installing HomeKit devices. Additionally, as I’ve been moving this bulb around in order to take these images after it was installed, I was actually quite impressed at how quickly it would reconnect to the network, and by extension, HomeKit, so I have to say it is once again leaving me quite impressed. While I’ve had it on test in the bathroom, there have been a few occasions where an automation, based on a trigger, hasn’t fired off – Eve motion sensor detects movement > triggers lights to come on. To be fair, this could be the fault of the Eve Sensor, which is two years old now, or it could be HomeKit not sending a signal through, so it’s hard to definitively lay the blame at iHaper.

So for roughly US$20, I can’t really fault it, although you can get the VOCOlinc Tunable White Smart Bulb for only $16.00, so it’s not as competively priced as it may have been even just 6 months ago. That’s the great thing about smart home products now as opposed to a year or so ago, lots of choice. 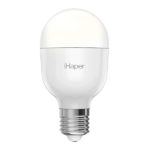 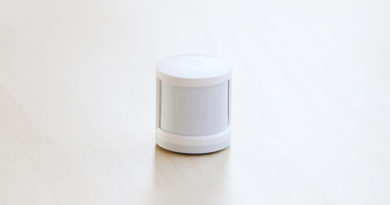 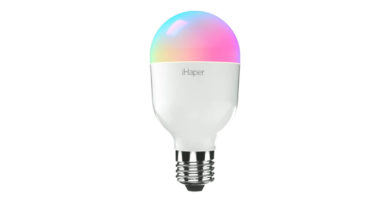